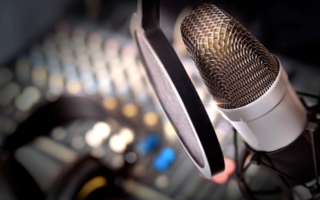 Dusty was born in the Mountain Time Zone side of the state, where he graduated from Custer High School in 2003.  While in high school he was part of a state championship baseball team and a top 20 golfer in the state golf tournament in his junior and senior year.

In 2003 he made is way to the Central Time Zone part of the state and enrolled in South Dakota State University and graduated 5 years later with a degree in Broadcast Journalism.

Before starting as a board tech and Saturday morning show host at Brookings Radio in 2008, Dusty held an eclectic array of gigs. Everything from being a tour guide with the National Park Service to co-founding a video production company called Lights Out Productions.

Dusty truly is a “Jack of All Trades, Master of None”, he dabbles in playing the guitar and piano, is an avid golfer, disc golfer, bowler, gamer, movie buff, concert goer, magician and self proclaimed amateur chef.

Dusty is the parade emcee every summer for the Aurora Gala Days parade and the public address announcer for Brookings High School Soccer. He’s also hosted events for the Cystic Fibrosis Foundation.